skip to main | skip to sidebar

NASCAR finally has the balls to park Kyle Busch

NASCAR finally stepped up and has the balls to park Kyle Busch from entire Texas race weekend after this stupid bonehead incident from last night:


Not only he retaliated and wrecked Ron Hornaday, a truck championship contender, over a racing incident but turned his truck head-on to the wall. If this happened 10-15 years ago Hornaday would have a been gravely injured. This wreck coming from heels of two freak accidents in auto racing resulting deaths of Dan Wheldon and Marco Simontelli in their series. Kyle Busch did a scumbag move as he not only wrecked a driver running for truck series championship, but nearly killed him. NASCAR couldn't ignore the crash the idiot golden boy did and decided to park him for the weekend.

Rangers and Tony Romo have something in common

Both are big time choke artists.
Posted by R.N. Coyote at 11:17 PM No comments:

Theo Epstein leaving the Red Sox for the Cubs marks end of era in Boston and drama that started in September. With 9 1/2 lead heading into September Red Sox blew it and missed the playoffs. Fitting their final game of the season with a collapse losing 2-0 lead and the game 3-2 to Baltimore Orioles. Lots of finger pointing and blame went around with Terry Francona, pitching staff that got worn out and tired, and batters forgetting how to swing the bat. It ended with Francona and Epstein leaving the team. Between the season ending to now drama spilled out of the ball club with Boston Globe leading the way and the media eating it up. Boston Globe blamed the collapse on starting pitchers Jon Lester, John Lackey, and Josh Beckett playing video games, eating fast food, and drinking beer in the clubhouse during games. Francona got the blamed for losing control of the team along his personal life aired out.

To me Red Sox played strong throughout the season, but started off poorly in the first month and ran out of gas in the final month. Pitching was so bad that reports Red Sox tried to pick up any fringe 5th starter in a trade for a player to be named later with no avail. The result of the drama have the Red Sox to look for a new manager and GM and the league looking into drinking allegations. The team is in search for any dignity they have whatsoever.
Posted by R.N. Coyote at 1:18 PM No comments: 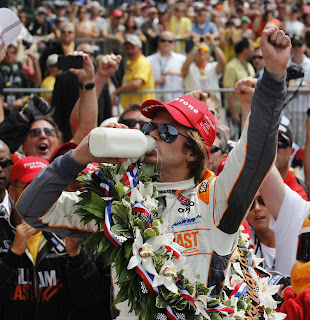 One of worst moments in this auto racing season happened. Two-time Indy 500 winner and 2005 Indycar champion Dan Wheldon lost his life in a 15-car wreck at Las Vegas. Hearing the news I shed tears. Lost is a gutsy determined driver along a father and a family man. His performances netted him 16 career Indycar wins including his memorable final victory at this year's Indy 500.

RIP Dan Wheldon. You are racing on a race track up in the heavens along the likes of Greg Moore, Jim Clark, and Dale Earnhardt. You will be missed from race fans all over the world.
Posted by R.N. Coyote at 10:36 PM No comments:

Raiders owner Al Davis passed away today at 82. Fans can just remember now and past decade of Raiders futility. But look back when he arrived in the 60s making the success through the 70s and 80s. His visionary ideas brought not only championships to the team but contributions to the league itself. He's George Steinbrenner before Steinbrenner took over the Yankees. He would do anything to win at all costs. He battled and fought against the league that would benefit his along bucking the trends and do it his own way. His rebel attitude and leadership took every officials, owners, players, and fans by storm that some have embraced. Call him crazy but the man bleed black and sliver all the way and is true face of Raiders. Whether its his dealings of AFL/NFL merger to Super Bowl victories to crazy draft moments to battling the coaches and players his rule with an iron fist making sure its his way to win or the highway. When I hear Frank Sinatra "I Did It My Way" one people I would think of is him. Rest in peace Al.
Posted by R.N. Coyote at 6:03 PM No comments:

Brett Favre proves once more to be a hypocrite and attention seeking whore. His recent comments on Aaron Rodgers:

What a jealous selfish shell of once "great" player. Is Bret Favre ego so fragile he rather continue put down Aaron Rodgers at all costs. How many titles do you expect him lead right away? In his first year as starter? It hurts Bret Favre so bad that it took Aaron Rodgers three years to lead the Packers to Super Bowl as starter while it took him five years. The fact Rodgers did it with a team hobbled with injuries having rely on 3rd and 4th string receivers and backups running backs and tight ends. Bret did it with a healthy supporting cast of Antonio Freeman, Reggie White and Desmond Howard. It also hurts Favre ego that its Aaron Rodgers in the limelight of Packers and NFL fans, not him. Fans these days remember Bret Favre for having over dramatic offseasons of can't deciding to play or retire for multiple years along a texting pictures of his penis to Jenn Sterger.

When Aaron Rodgers asked about the comments what did he do? Aaron Rodgers just deadpanned and commented about his teammates and how well team played. That is how to be a leader and a team player, something Bret Favre forgot in his final seasons of his career.

Brett Favre just go away. Quit being a whore of your own self. Let someone else have the fame instead your bitter tired ass.
Posted by R.N. Coyote at 12:34 AM No comments:

Era of Ozzie is over in Chicago. Outspoken never lost for words manager Ozzie Guillen received his release from White Sox and signs to manage Florida Marlins for 2012. Marlins sent two players to White Sox for compensation. For 8 seasons Ozzie successfully led White Sox to multiple playoff runs, division titles, and World Series championship ending White Sox 88 year champion drought. He brought more attention to himself than the team for his "shoot hard" rants and comments. The last few seasons been filled disappointment and his relationships with front office strained. Ozzie gets a fresh new start in Miami with inept run team. Marlins organization would favor one player and demotes those that disagree with front management. This could go get wild especially Ozzie gives ownership favorite boy Hanley Ramirez a much needed butt kicking. It looks to be explosive next year in Miami.
Posted by R.N. Coyote at 7:23 PM No comments:

After last week debacle which his fumble and ill-timed interception caused New York Jets to comeback and beat the Cowboys Tony Romo felt the heat from fans and the media. Despite performing well the label "choke" hung over his head questioning can he produce under pressure and be clutch when needed in the 4th quarter near the end of the game. On Sunday he redeemed himself. Playing against 49ers he gets taken out of the game when he got hit hard suffering rib injury. He came back in 4th quarter delivering a comeback from 10 points down to tie the game going into overtime. In overtime he made a clutch 77-yard throw to receiver Jesse Holley who took it to 49ers one yard line. It resulted game winning field goal giving the Cowboys a win 27-24. The next day it was revealed he played with a broken rib and punctured lung. Now that big balls. You hear that Jay Cutler? After a week of taking stinging criticisms an injured Tony Romo bounced back with a gutsy performance.
Posted by R.N. Coyote at 1:44 AM No comments:

On Monday Mariano Rivera earned career save 602 breaking Trevor Hoffman record in career saves and looks to continue to add more in the record books. Ever since he broke in the league and became full time closer in 1997 he been nearly unstoppable. His signature pitch cutter have baffled batters and closed out games for the Yankees. In era where closers are effective for 5-7 seasons he continue to come through for 15 seasons. His importance to the Yankees allow the team to win multiple divisions, pennants, and World Series. Combined with his record of 42 saves in the postseason and 4 from All-Star game he has total of 648 saves. There are times he looked human on the mound, but continue to persevere under intense pressure. Looks like he's not stopping anytime soon as he continue pile more onto the record books.
Posted by R.N. Coyote at 1:22 AM No comments:

The end of Kerry Wood?

Kerry Wood season ends with a torn meniscus and possibly his final season of his career if Cubs doesn't bring him back for next season. It all based on Cubs decision to re-sign him for next season. If Cubs choose not to re-sign him its end of Wood's career. The fireballer rose as one top pitchers of the league for few years only to have his career derailed with numerous arm/shoulder injuries. Despite his numerous setbacks he continued to bounce back to pitch as a closer and relief pitcher. Coming back to the Cubs this season he performed well on a very disappointing team shows he can still go. His career have so many "what ifs" but he continue on to the mound and pitched. With another injury and contract uncertainty its likely he played his last game.
Posted by R.N. Coyote at 6:55 PM 1 comment: